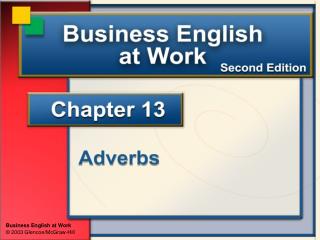 Objectives. Identify adverbs and the words they modify. Differentiate between the use of adjectives and adverbs. Recognize the importance of the placement of adverbs. Form the comparative and superlative degrees of regular and irregular adverbs. continued. PP 13-1a. Objectives. continued.