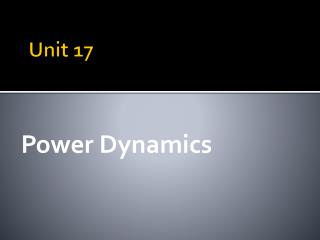 Unit 17 - . radioactivity. atomic mass is the average number of p + and n found in the nucleus. all elements have

Unit 17 - . objectives. in this unit students are required to: master the main language structures practice listening

Unit 17 - . databases. databases. what is databases? read the text on page 27 then complete part c do the puzzle and

Unit 17 - . sdof response to applied force revision a. introduction. sdof systems may be subjected to an applied force

SAT Unit 17 - . #1 discord. noun disagreement; dissonance a certain amount of discord is expected within every family. #2