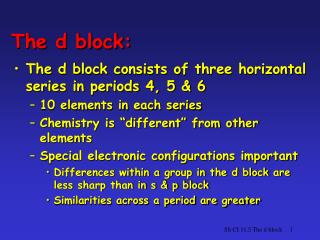 The d block:. The d block consists of three horizontal series in periods 4, 5 & 6 10 elements in each series Chemistry is “different” from other elements Special electronic configurations important Differences within a group in the d block are less sharp than in s & p block

Block by Block Preparation of the SF 361, Transportation Discrepancy Report (TDR) - . this is the front side of the sf