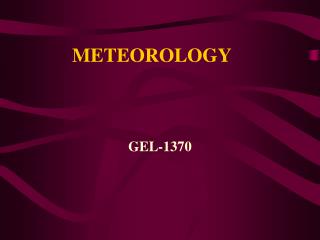 METEOROLOGY. GEL-1370. Chapter Five. Cloud Development & Precipitation. Goal for this Chapter. We are going to learn answers to the following questions: Why there any instabilities in the atmosphere? How can we make the atmosphere more stable? Why cloud droplets seldom reach the ground?

METEOROLOGY - . gel-1370. chapter four. humidity, condensation &amp; clouds. goal for this chapter. we are going to

Meteorology - . weather – short term variations in atmospheric conditions. what causes weather?. the main cause of all

Meteorology - . the study of atmosphere and its processes. weather vs. climate. weather is the day-to-day atmospheric

METEOROLOGY - . gel-1370. chapter six. air pressure and wind. goal for this chapter. we are going to learn answers to the

Meteorology - . “climate is what you expect. weather is what you get.” -mark twain. air masses . masses of air are