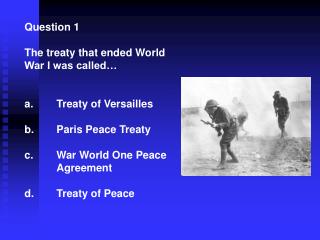 Question 1 The treaty that ended World War I was called… Treaty of Versailles Paris Peace Treaty War World One Peace Agreement Treaty of Peace. Question 2 What Canadian city was destroyed in 1917 by an explosion caused when two ships collided in the harbour? Vancouver ECOWAS Programmes and Activities on Migrations issues - . establishment of ecowas. created on may 28, 1975 with the

WORLD PEACE AND CONFLICT UNDER GLOBALIZATION - . what is &quot;globalization&quot; and why should anyone care

No. 95 - . why were the spanish given control of louisiana in the treaty of paris at the end of the french and indian

World War II - . the effects of the treaty of versailles. the terms. germanys forced to accept: war guilt clause