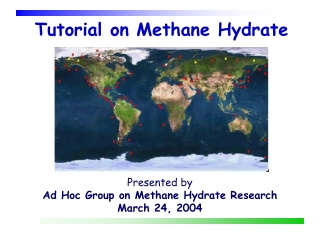 Deep Sea Methane Hydrates - . matt sims scm 330. what are methane hydrates?. methane is a basic hydrocarbon it is a gas

Hydrate Notes - . how to find a formula. 6 steps to find hydrate formula (goal is to solve for x). write out generic

How to write a lab report - . percent water in a hydrate lab. purpose (look in experiment overview). the purpose of this

CHEM 1031 - . determination of the formula of a hydrate. purpose and goals. determine the number of moles of water in an

Methane; What is it? - . by: david, evan, and luna. innovations with chemistry. a s light introduction to methane. ch 4 :

METHANE - . topics for today. why do we care about methane? what are the sources and concentrations of methane in the

The Formula for a Hydrate - . chemistry 11.5. objectives. explain what a hydrate is and how its name reflects is

Do Now : - If one stick of juicy fruit gum weighs 3.0g, what percent of the total mass of the gum is sugar?. hydrate lab

Follow-up to IPY cruise JR211 - Jcr 269a: arctic hydrate dissociation as a consequence of climate change: determining the

Methane gas and energy source - . by dejuan edwards and dylan duncan. what is methane?. methane is 87% gas by volume. it