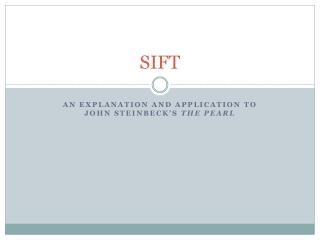 SIFT. An explanation and application to John Steinbeck’s The Pearl. SIFT. This is a technique to help you begin to practice literary analysis (something you will be doing a lot more in the future). A method that allows you to “sift” through the parts in order to comprehend the whole. SIFT - . this is an acronym to help you read understand and analyze the text more completely!.

The SIFT Method - . what does sifting do? if we are sifting while we’re reading, what do you think we’re doing? the

SIFT graphic organizer - . what we found. what we thought about it. symbols contribute to tone/theme how? imagery creates