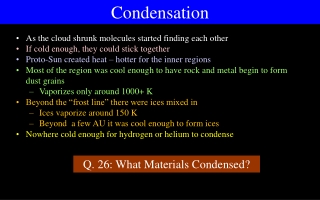 Condensation. As the cloud shrunk molecules started finding each other If cold enough, they could stick together Proto-Sun created heat – hotter for the inner regions Most of the region was cool enough to have rock and metal begin to form dust grains Vaporizes only around 1000+ K CONDENSATION - . to know that condensation is the process of gas cooling to form a liquid. mª teresa villarroya i

Condensation: - . to change from a gas to a liquid. soda can. what forms on the outside of a cold soda can?. windows. why

Condensation - . condensation. atmospheric moisture has its most direct influence on land only when it is in its

Condensation - . reading: chap 13. in the continuum regime, diffusion theory is used. at steady state. q: is n d equal to

condensation - . water condensation on a glass window. force. friction. gas. when a liquid reaches its boiling point , it

Condensation - . water vapor in the air gets cold and changes back into liquid, forming clouds. this process is called

Cool Condensation - . aim: to understand and identify what is condensation. “does it have anything to do with condensed