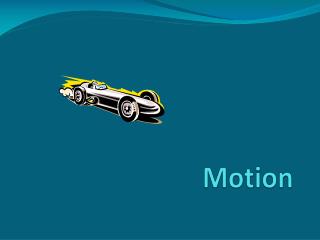 Motion. Newton’s First Law. Newton’s First Law of Motion An object at rest will remain at rest and an object in motion will continue moving at a constant velocity unless acted upon by a net force. Motion. Problem: Is your desk moving? We need a reference point ... Unit 2 The Sky and Celestial Motions - . the sky and the constellations daily motion of the earth annual motion of the

Do now – on a new piece of paper - . the diagrams below represent two types motions. one is constant motion, the other,

Wave Motion ( 波動 ) - . wave motion is a kind of vibration(oscillation), through which, energy (not matter) can be

Dynamics - A branch of mechanics that deals with the “ motion ” of bodies under the action of force s. dynamics. two

Chapter 5 Projectile motion - . chapter 4: straight line motion that was only vertical or only horizontal motion. chapter

The role of contours in form-based motion processing - . p.u. tse, g. p. caplovitz, and p.-j. hsieh. form from motion or