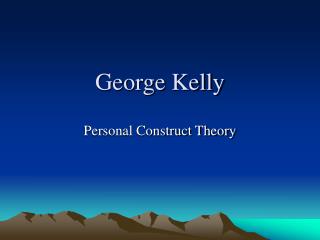 George Kelly. Personal Construct Theory. I. Biography: 1905-1967. George Kelly was born in a farming community near Wichita, Kansas. He graduated with a degree in physics and mathematics from Park College in Missouri in 1926. George Kelly - . 1905 - 1967. constructive alternativism. the foundation of kelly’s theory “we assume that all of our

George Kelly Barnes - . gangster of the prohibition era. background info. he was born in july of 1895 in tennessee he

Kelly Nelles - . mee 7604 – technology for instruction. hobbies. i love to cook and bake. right now, i am learning how