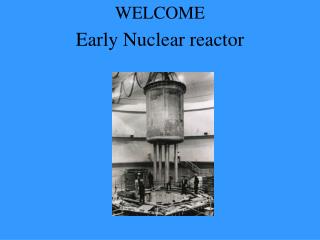 WELCOME. Early Nuclear reactor. The Vision. “It is not too much to expect that our children will enjoy in their homes [nuclear generated] electrical energy too cheap to meter.” – Lewis Strauss, Chairman of the U.S. Atomic Energy Commission (1954). Nuclear Power Today. The Early Universe as a Nuclear Reactor - . friday, november 14. despite billions of years of fusion in stars, most