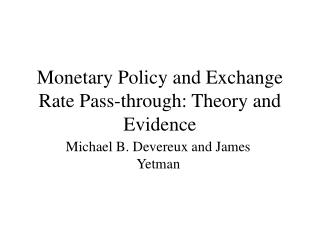 Monetary Policy and Exchange Rate Pass-through: Theory and Evidence. Michael B. Devereux and James Yetman. Main Features:. The paper develop a model of exchange rate pass-through based on the frequency of price changes by importing firms; Chapter 34 – The Influence of Monetary and Fiscal Policy on Aggregate Demand - . money market - the financial market