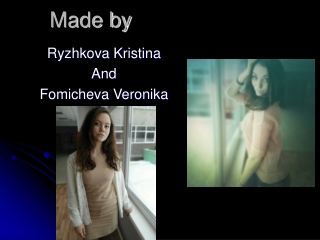 Made by. Ryzhkova Kristina And Fomicheva Veronika. The Woman Who Disappeared. A Visitor. My name is Lenny Samuel. I am a private detective. My office is on the west side of LA. Made by: Kathy - . my product. do you remember a very funny and cute animal at tangled? yes, it’s chameleon!. the

Made by Lewis - . on saturday i went to the search and rescue expedition at the maritime museum in falmouth there was a

Hampers Made by - . ehomemakers partners (less fortunate women and micro-entrepreneurs) help the women help themselves.

Made by: Catherine - Marketing plan for tangled. made by: catherine. a suit of tableware. from the tangled movie, i think

Made by Klim Shirokovsky. - Scotland. we are fond of scotland!. made by klim shirokovsky. menu. - scotland the beautiful.

Made by Ina Huang - . how do the sikhs practice their