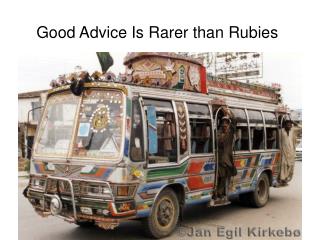 Good Advice Is Rarer than Rubies. The Author (1). Salman Rushdie (1947-). An Indian-born British essayist and author of fiction, most of which is set on the Indian subcontinent. His narrative style, blending myth and fantasy with real life, has been described as connected with magic realism. RUBIES - . r read and reread everything. u underline the question. b bracket the key words i identify the key concept

Damn Good Advice - From george lois. if it does shock and provoke, it's not a big

Rubies For Sale - At israel-diamonds.com, our enticing rubies for sale are targeted at customers who love collecting

Good Advice on Writing - . partly based on the teachings of jim dodge. nouns and verbs. she walked slowly into the room.

“ A wife of noble character who can find? She is worth far more than rubies .”

Advice for Taking good photographs - . “photography is not about the camera but the eye standing behind the camera”

WHEN NO LAW IS BETTER THAN A GOOD LAW - . utpal bhattacharya keynote address the development of stock exchanges santiago,

Is Your Domain Name Doing More Harm Than Good? - Differences between unix and windows web

WHEN NO LAW IS BETTER THAN A GOOD LAW - . utpal bhattacharya keynote address the development of stock exchanges santiago,

Good Advice Long Ago Received - Stabilization wedges and the management of global carbon for the next 50 years: a primer