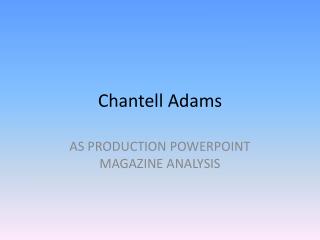 Chantell Adams. AS PRODUCTION POWERPOINT MAGAZINE ANALYSIS . THE ARTISTS AND YOUR AUDIENCE. Henry Adams - . a teacher affects eternity: he can never tell where his influence stops. marcus tullius cicero. what

Abigale Adams - . abigale adams was born in weymouth, massachusetts during a blizzard. she was born on november 11 th ,

Ansel Adams - . breeanna clack. a little about ansel adams. ansel adams was born in san francisco, california. he was

Brian Adams - . get off my back. guitar solo ……. well you think that you can take me on  you must be crazy  there