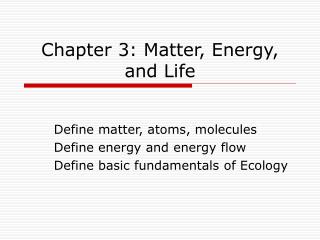 Chapter 3: Matter, Energy, and Life. Define matter, atoms, molecules Define energy and energy flow Define basic fundamentals of Ecology. I. From Atoms to Cells. A. General Information 1. Ecology – The study of the relationships between organisms and their environment Oxidation to Release… - Cellular respiration. oxidation to release…. energy. matter is recycled energy is not

Chapter 5 Ground Rules of Metabolism Sections 1-5 - . energy. we define energy as the capacity to do work one form of