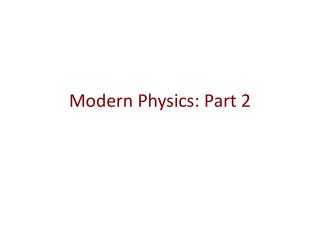 Modern Physics: Part 2. ALL Galaxies have redshifts – farther from us greater redshifts!. Many other scientists made observations similar to Slipher’s. Modern Physics - . what is meant by “ quantized ”? quantity specific and discrete quantity packets of definite size.

Basic Physics, Part II - . work, energy, and power. energy: the capacity to do work. this notion makes sense even in a