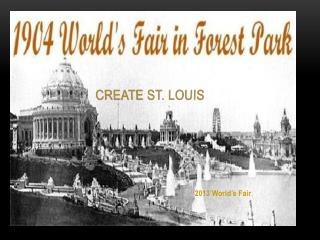 Create St. Louis. 2013 World’s Fair . What is it?. Every year on June 13-july 1 st 2 week event no hours -Rides, (Ferris wheel and other rides that relate to 1904 event) - Food (authentic and non- Authentic) -events around the grounds