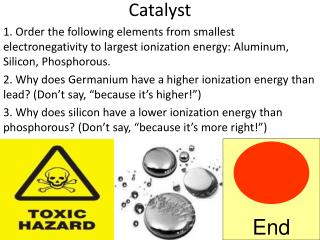 Catalyst. 1. Order the following elements from smallest electronegativity to largest ionization energy: Aluminum, Silicon, Phosphorous. 2 . Why does Germanium have a higher ionization energy than lead? (Don’t say, “because it’s higher!”) Catalyst - . if i have a can of coke and i put it in a bowl of water, will it sink or float? what about a can of diet

Catalyst - . 1. complete the “goals for the week” section on your new daily work organizer. 2. draw the following

Catalyst - . levels of variables. the levels of a variable are the specific ways that a scientist changes the you-change

Catalyst - . calculators today! 1. what would be the new volume if the pressure on 8 l of gas is increased from 10 atm to

Catalyst - . catalyst: copy and answer the following questions what are your goals for second semester? what are your

Catalyst - 1. how are frequency and wavelength related? they are inversely related. as one goes up, the other goes down!.

Catalyst: - . try to read the colors of the ink instead of the words themselves. agenda:. malleable intelligence mi

Catalyst - Take out your hw!. catalyst. objectives i can define le chatelier’s principle. i can describe factors that

Catalyst - . use your notes to answer the following questions 1. what group is br in? 2. what family is br in? 3. what

Catalyst - . objectives i can define le chatelier’s principle. i can describe factors that shift chemical equilibrium.

Catalyst - . turn to page nc 34 in the textbook. for 2 the careers on these pages, answer the following questions: what

Catalyst - . what is the difference between an ionic and covalent bond? name na 2 o. name no 3 . how many grams are in 4

Catalyst - . 1. what is the difference between speed and velocity? 2. put these objects in order from slowest to fastest: