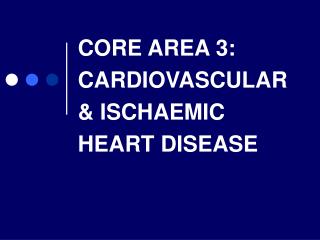 The Heart Cardiovascular System - 3 - . for student copy. position of the heart. human heart is about the size of a fist

Cardiovascular Disease - . cardiovascular disease (cvd) is the leading cause of death in the us, claiming one life every

Ischaemic Heart Disease CASE A - . case a:. mr ha, aged 60 years, was brought in to a&amp;e complaining of chest