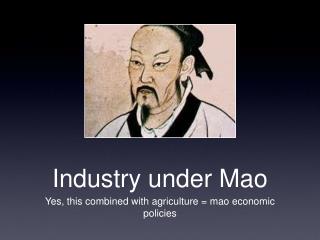 Industry under Mao. Yes, this combined with agriculture = mao economic policies. Background. Since pre Qing era through the GMD, China had suffered a large trade deficit Foreign ownership predominant in resource rich areas For example, in 1922, 78% of cola mines were owned by foreigners China Under Mao - . essential question: how did life in china change under mao’s rule?. mao set about building a

China under Mao Zedong 1949 - 1976 - . pages marked with a require written responses from you. place your written

Meet Mao - . hero or villain?. which is which:. what are traits/characteristics of a hero?. how about a villain?. are