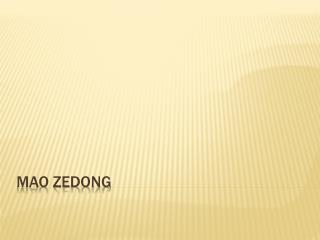 Mao ZeDong. Mao Zedong was born in Shaoshan , Hunan, he was the son of a wealthy farmer. Adopted a Chinese nationalist and anti-imperialist outlook in early life (particularly influenced by the Xinhai Revolution (1911) and the May Fourth Movement (1919) )