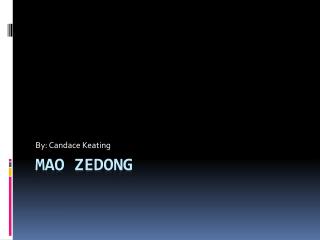 By: Candace Keating. Mao Zedong. MAO. Moa was an evil man responsible for killing 75 million of his own people, that’s MORE than Hitters brutal killings and how many people Stalin killed combined. Moa was the creator of the communist party became leader of his own party after the Long March.