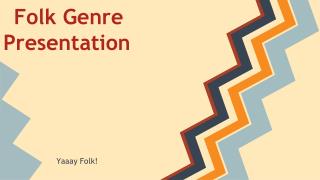 Genre: Folk Tale - . a folk tale is a story that has no known author and was originally passed on from one generation to

SOUL GENRE PRESENTATION - . soul music originated in the united states in the 1950s and early 1960s

A Multi-Genre Presentation! - . a multi-genre presentation!. and a fluency exercise……. celebrating veterans – nov

Genre - Declarations in dialogue narrative of the life of frederick douglass, an american slave written by himself.

Genre - . scholarship workshop june 2012. what is genre? . genres are constituted of features of content (such as story

GENRE - . = type or category that most films fit most comfortably in. these formulas were crystallized in the classical

Genre - Short story terms continued. genre. the term genre (pronounced jahn – ruh ) refers to a category in which a

GENRE - . just a way of saying ‘ different ’ categories or types of books. how about. historical fiction realistic

Genre - . literary categories. why genre?. among other things, the manitoba grade 7 english curriculum expects you to do