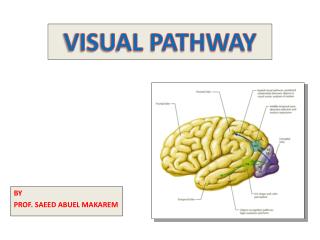 VISUAL PATHWAY. BY PROF. SAEED ABUEL MAKAREM. Vision is the most highly developed and versatile of all the sensory modalities. The one which man are most dependent. The optic nerve and retina develop from the prosencephalon so, they are considered as an outgrowth of the brain itself. Prof. Saeed Abuel Makarem - Forearm. prof. saeed abuel makarem. objectives. by the end of the lecture, you should be

By: Prof. Saeed Makarem - The submandibular region-ii. by: prof. saeed makarem. objectives. by the end of this

BY PROF. SAEED MAKAREM - Lymphatic of the abdominal viscera. by prof. saeed makarem. lower end of the esophagus the