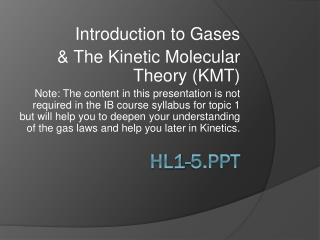 Introduction to Gases & The Kinetic Molecular Theory (KMT) Note: The content in this presentation is not required in the IB course syllabus for topic 1 but will help you to deepen your understanding of the gas laws and help you later in Kinetics. HL1-5.ppt. ppt-5 - â€œeducationâ€ and â€œinternetâ€, the two most important aspect of todayâ€™s life and if

IB Chemistry HL1 - . grade 11 : unit 6- energetics ib topic 5. system and surroundings. the system is the name we give

5 reasons for anodizing - PPT - Anodizing is an electrolytic process where the surface of the metal is oxidised. in this

5 reasons to visit Belgaum - PPT - Belgaum is a vibrant city blessed with natural beauty. the city has witnessed many

5 Tips to Avoid Overeating PPT - Avoid eating of fast & junk food is one of them is the best way to stop overeating.

5 THEMES OF GEOGRAPHY - PPT Notes - . location: where is it?. absolute location: uses latitude and longitude