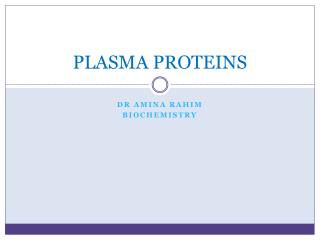 PLASMA PROTEINS. DR AMINA RAHIM BIOCHEMISTRY. PLASMA is the clear, yellowish fluid portion of blood, lymph, or intramuscular fluid in which cells are suspended. It differs from serum in that it contains fibrin and other soluble clotting elements and Plasma Proteins - . immunoglobulins. plasma proteins. 1. blood is a very important fluid. what is blood? what does blood

Proteins - . proteins serve many functions, including the following: 1. structure: collagen and keratin are the chief