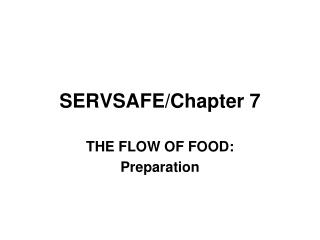 SERVSAFE/Chapter 7. THE FLOW OF FOOD: Preparation. WAYS TO THAW FOOD. Thaw food in a cooler at a temperature of 41 degrees F. or lower Submerge food under running water at 70 degrees F….make sure water is potable (meaning safe to drink) Ch 7 review - . el pretérito is the past tense in spanish. in english it is referred to as the preterite. . – ar verb