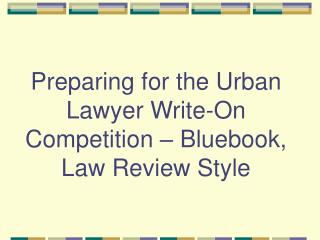 Preparing for the Urban Lawyer Write-On Competition – Bluebook, Law Review Style. Preliminary Points. Look it up -- even if you THINK you know the answer. Guessing can be dangerous. Use the detailed index. Start with very specific terms. Move to more general terms and synonyms.

Preparing an Urban Redevelopment Plan Step by Step - . why develop a ura plan?. provides cities and counties the power to

Pure Competition and Monopolistic Competition Chapter 10 - . pure competition is a standard against which other market