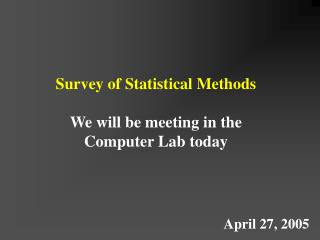 Survey of Statistical Methods We will be meeting in the Computer Lab today. April 27, 2005. Chi Square Test of Independence. Purpose To determine if two variables of interest independent (not related) or are related (dependent)? Today we will be: - . reviewing language aquisition. http://www.youtube.com/watch?v=cqettw8c9by&amp;feature=fvwrel.

Today we will be… - . questions to get you thinking. on the next slides you will see different questions think -

Today we will be learning: - . the birth of the alphabet- writing system of language. written language is more

Today we will be covering: - . what exactly is erp? history of erp. how erp can be used in our company? erp

Today we will be discussing the “F” word - . feudalism…. what were you thinking??. do now. the topic of today’s

Today we will… - . 8.11 (b) distinguish between inherited traits and other characteristics that result from

Today we will … - . learn how to craft the right message for each of the five stages of travel. discover new techniques

Today we will: - . talk about revision strategies; update our submission to pit; continue our conversations on the pit

Today we will - . learn about christian just war theory and how that relates to modern wars. we will learn to;. list at

Today we will … - . identify how to write aims for an investigation in modern studies. what a hypothesis is.

Today we will - Lecture 27. today we will put a twist on our normally linear operational amplifier circuits to make

Today we will… - . identify the information handling questions which will be assessed in higher modern studies.