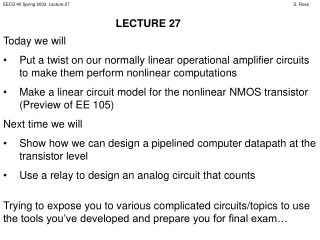 LECTURE 27. Today we will Put a twist on our normally linear operational amplifier circuits to make them perform nonlinear computations Make a linear circuit model for the nonlinear NMOS transistor (Preview of EE 105) Next time we will