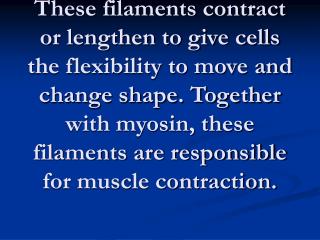 These filaments contract or lengthen to give cells the flexibility to move and change shape. Together with myosin, these filaments are responsible for muscle contraction. actin filaments. Electronic and Ionic Conductivities of Microtubules and Actin Filaments