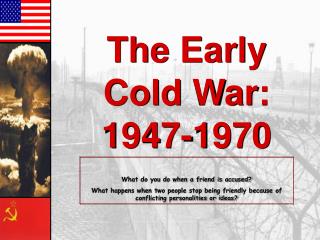 The Early Cold War: 1947-1970. What do you do when a friend is accused? What happens when two people stop being friendly because of conflicting personalities or ideas?. Cold War?. The tension and rivalry between the USA and the USSR was described as the Cold War (1945-1990). Cold in the USA - Millions of people awoke to painfully cold weather in the eastern united states, with temperatures

1. THE COLD WAR - . definition: a state of permanent hostility between two powers which never erupts into an armed

AP European History - . cold war review. bell ringer: the cold war…what was it?. the cold war was a diplomatic crisis

Chapter 26 Section 1 Origins of the Cold War - . objectives. we will discuss the events that began the cold war. united

The Cold War 1945-1991 - . conceptual unit question. did the polarization of the world by the two superpowers benefit or

The Cold War - . soon after the end of world war ii, problems between the west and the soviet union. soviets: strip