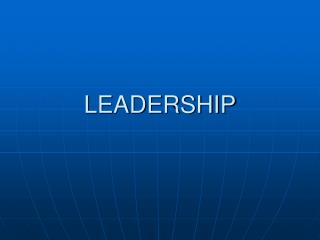 LEADERSHIP. Management vs. Leadership. Leadership and management are two different terms Management involves developing formal plans and monitoring results Leadership is about coping with change and establishing a vision. Leadership.

Troop Leadership Training - . “training boy leaders to run their troop is the scoutmaster's most important job.”

Leadership - . there is nothing more difficult to take in hand, more perilous to conduct, or more uncertain in its

Introduction to Management 11e John Schermerhorn - Planning ahead ? chapter 13 study questions. what is the nature of