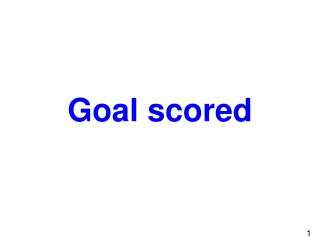 Goal scored. Goal definition. A loose ball completely inside plane formed by rear edges of goal posts, crossbar, and goal line. Goal. Can hit any number of pipes without being a goal. A ball resting on the goal line is not a goal. The ball is dead as soon as it breaks the plane. No goal. How is your writing test scored? - . understanding the following information can make the difference between passing or

Goal - . reliable comprehensive affordable easy to use (if you have access to a microscope). primary area (100%) nordic

Goal: - . understanding and creating platforms for easy capture and edit of materials to understand structure and