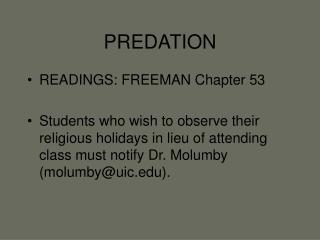 PREDATION. READINGS: FREEMAN Chapter 53 Students who wish to observe their religious holidays in lieu of attending class must notify Dr. Molumby (molumby@uic.edu). CONSUMPTION. The consuming of one living thing by another. A basic eating relationship between populations of different species.