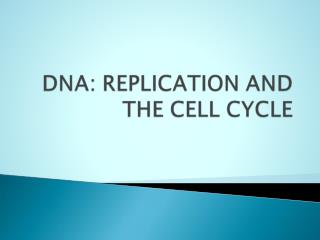 DNA molecule described as double helix. WE EXPRESS OUR DNA as we need it………. The ENTIRE DNA MOLECULE can Replicate: Then You have 2 from 1 (DNA REPLICATION---Leads to MITOSIS ..one cell goes to two cells. OR DNA – The Double Helix - . recall the nucleus is often called the “ control center ” because it controls all of the

The Double Helix - Dna has 2 polynucleotide strands that are held together by hydrogen bonds. the two strands are coiled

The Double Helix - . the structure of dna. dna is a nucleic acid (deoxyribonucleic acid) nucleic acids are polymers (long

DNA molecule - Answer : the slight excess of mass of the less stable isotopes is converted to energy when isotopes are

DNA molecule - Prokaryotic cells have a mechanism for division known as binary fission, which consists of the formation

DNA molecule - Answer : the slight excess of mass of the less stable isotopes is converted to energy when isotopes

Watson and Crick’s double helix model of DNA - ………. let me introduce myself…………. watson and crick’s