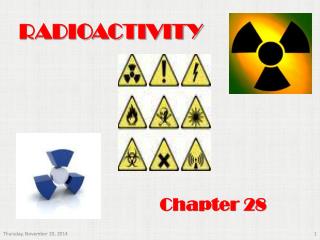 RADIOACTIVITY. Chapter 28. What is the RADIOACTIVE ?. Radioactivity is a phenomenon in which an unstable nuclei undergoes spontaneous decay as a result of which a new nucleus is formed and energy in the form of radiation is released. RADIOACTIVITY. Nuclear Radiation. Chapter 18 - . the nucleolus: a chemist’s view. topics. nuclear stability and radioactive decay the kinetics of

PHYS 342 - . modern physics 2. course elements. the schrödinger equation the rutherford-bohr model of the atom the