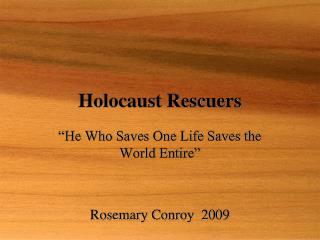 Holocaust Rescuers. “He Who Saves One Life Saves the World Entire” Rosemary Conroy 2009. Do not romanticize history to engage students’ interest. Less than one-half of one percent of the total population (non-Jews) under Nazi occupation helped rescue Jews. Holocaust Rescuers - . “he who saves one life saves the world entire” rosemary conroy 2009. do not romanticize

Rescuers - . what is a rescuer?. rescuers are those who, at great personal risk, actively helped members of persecuted

Robot Rescuers - Twenty-four teams compete to win a portion of a $3.5 million prize by operating humanoid robots across a

SELF CONTAINED SELF RESCUERS - . overview can scsr compliment my mine emergency plan?. self contained self rescuers.