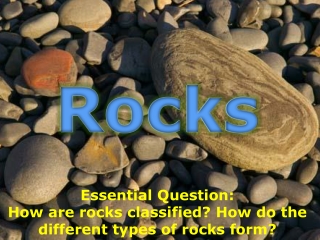 Rocks. Essential Question: How are rocks classified? How do the different types of rocks form?. What is a Rock?. Rocks are made of mixtures of minerals and other materials. Some rocks contain one mineral, some contain several different minerals Identification of Soils and Rocks - . ii. * classification of rocksaccording to their mode of origin, rock materials are

CHAPTER 14 ROCKS: MINERAL MIXTURES - . rocks change through a process called the rock cycle and rocks are classified by

Rocks A rock is a mixture of one or more minerals. They are classified by the way they are made. - Rocks a rock is a

Rockin’ Rocks - . mat burridge, tori sivers, jessica tremblay. you dig it?. rocks are all around us. due to the large