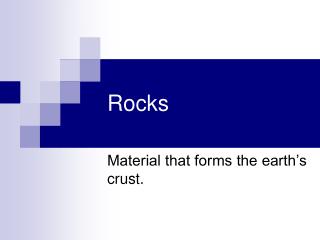 Rocks. Material that forms the earth’s crust. What are rocks made from?. Rocks are made up of different minerals. These minerals are held together by a natural cement. There are many different types of rocks with different mineral content, hardness, and texture. . Types of Rocks.