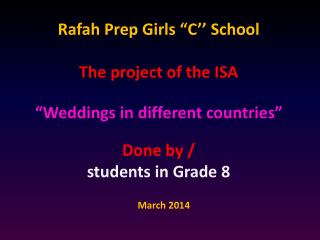 Rafah Prep Girls “C’’ School . The project of the ISA. “Weddings in different countries”. Done by / students in Grade 8. March 2014. Before the Wedding in Britain . Marriage is usually initiated by a proposal of marriage, simply called "a proposal". PSYCH 5 QUIZ PREP 1 - . a reporter wants to write a story describing the occurrence of mental disorders in the us. she

Independence Middle School Science MAP Prep - . the rock type that would contain fossils would be?. metamorphic.

Welcome - . unit 1. a trip to beijing. 河北省唐山市 费学会. lesson 1 may i go to beijing?. text. explanation.