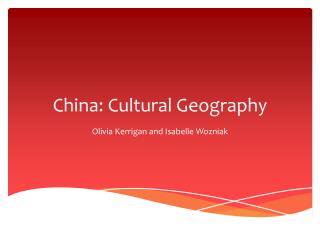 Unit4 - . cultural i nformation. 1. a variety of foods most commonly eaten in china. cultural information 1. in general,

&quot;... a social process in which the constraints of geography - On social and cultural arrangements recede and in

Arkansas Geography - . united states of america. what is a country?. it is a large amount or area of land here are the