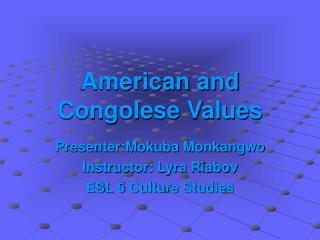 American Values and Priorities - . the power of “values”. many of the most successful enterprises have been built on

Changing American Values - . the tale of two americas: modern vs. traditional in the 1920s. new american values. a.

American Society and Its Values

American Values in the 1950s - . the american dream in the 1950s. section 1: postwar america. after wwii, returning vets

Values and Values Systems - . values. basic conviction: “ a specific mode of conduct or end-state of existence is

Values and Ethics of the American Founding Fathers - . humanism. humanism is a broad category of ethical philosophies