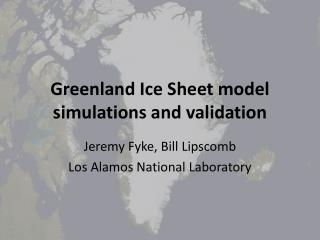 Introduction. GCM and ice sheet simulations. Conclusions. Other mechanisms for inception. - The closure of the panama

Iceland is green, and Greenland is ice… - . but for how long?. images courtesy of nasa. dr. sebastian mernild. as a

Effect of the Greenland Ice Sheet on the MOC and Future Climate: Preliminary Results - . aixue hu and gerald a. meehl.