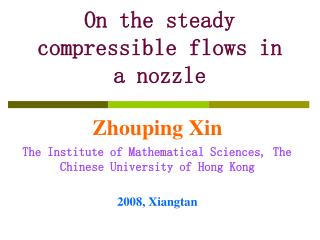 On the steady compressible f lows in a nozzle On the steady compressible f lows in a nozzle

STUDY OF COMPRESSIBLE SHOCK FOR A TWO DIMENSIONAL MODEL OF A DELAVAL NOZZLE - . what is computational fluid dynamics?.

Our mission keeps us on a steady course! - . a new leaf helping families, changing lives. behavioral health agency since

Steady free-surface flows - . conservation of mass. simply it means that the mass of the system is