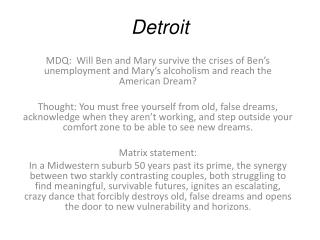 Detroit. MDQ: Will Ben and Mary survive the crises of Ben’s unemployment and Mary’s alcoholism and reach the American Dream? Thought: You must free yourself from old, false dreams, acknowledge when they aren’t working, and step outside your comfort zone to be able to see new dreams.