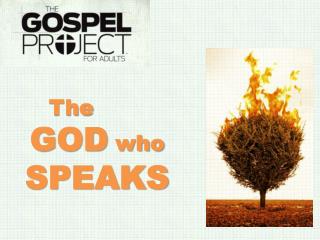 Understanding How God Speaks - . temporary residents. what would you think if i told you that you were an alien? not the

The god who laughs! - . songs for the journey psalm 2 pastor david leppard – trinity alliance church. today we are

Women’s Conference OPEN - REVELATION: God Speaks - Quote: c.s. lewis – my idea of god is not a divine idea. it has

Who speaks, sows; Who listens, reaps. Argentine Proverb - . listening, not imitation, may be the sincerest form of

Establishing Who God Is: God, the Spirit … - . he appears in power he demands a response he speaks through people he

Who is the god/goddesses? - . apollo. apollo. who are the gods?. in greek mythology, greek gods frequently interact with