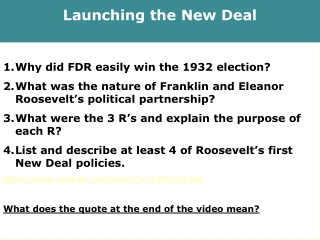 Launching the New Deal. Why did FDR easily win the 1932 election? What was the nature of Franklin and Eleanor Roosevelt’s political partnership? What were the 3 R’s and explain the purpose of each R? List and describe at least 4 of Roosevelt’s first New Deal policies.

Launching the New Republic - . chapter 7 part i. what problems faced the new nation in 1789?. nc and ri still haven’t

Launching the new nation - . ch 6. washington’s presidency. with the ratification of the constitution it was understood

Launching the New Government - . mr. phipps american history. problems in the new country. how to include state