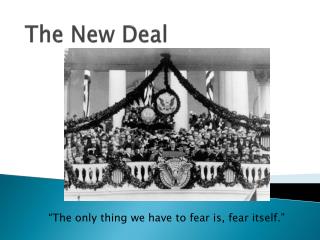 The New Deal. “The only thing we have to fear is, fear itself.”. Fireside Chats. FDR gave 30 radio speeches to the nation, which became known as fireside chats . FDR’s first fireside chat on the bank crisis. (March 12, 1933). The Bank Holiday.